The Metropolitan Borough of Tameside named after the River Tame, which flows through the borough and spans the towns of Ashton-under-Lyne, Audenshaw, Denton, Droylsden, Dukinfield, Hyde, Mossley and Stalybridge plus Longdendale. Its western border is approximately 4 miles (6.4 km) east of the City of Manchester city centre. It borders High Peak Council in Derbyshire to the east, the Metropolitan Borough of Oldham to the north, the Metropolitan Borough of Stockport to the south. 63.5% of the borough is greenspace and The Peak District National Park is easily accessible – Tameside enables one step to be in the country and one in the city and broader urban areas of Greater Manchester.

The current borough was created in 1974 and the towns of the borough had grown through their involvement in the cotton industry, which dominated the local economy. Tameside features flat lowlands in the west and highlands in the east where the western edge of the Pennines encroaches on the borough. The Ashton, Hollinwood Branch, Huddersfield Narrow and Peak Forest Canals all run through the borough meeting at Portland Basin. Greenspace accounts for 63.5% of the Tameside’s total area. Tameside has eight designated Local Nature Reserves.

There’s lots to do in Tameside and it is within easy reach of Manchester city centre and its vibrant nightlife. Hyde Leisure Park, offers state-of-the-art sporting facilities with a leisure pool and floodlit stadium, fitness suite and gym. There are sports centres and pools throughout the borough.

The Museum of the Manchesters, in Ashton, tells the story of the historic regiment and Tameside’s Heritage Museum, Portland Basin, covers the last 200 years’ history of the borough in a rebuilt canal warehouse. Two main art galleries house touring and local exhibitions, with each of the 15 libraries containing its own exhibition area.

The borough is endowed with a variety of countryside – three river valleys, three country parks, a fine canals network, pastoral farmland, woodland, water and high open moorland. The council’s countryside ranger service co-ordinates a wide range of activities for all.

The area is well-known for its bustling markets, variety of community events and entertainment such as Splendid Weekend and the Tameside Music Festival, and the nationally famous brass band competitions.

By road, rail and air, Tameside is ideally placed to connect with the North West, the rest of the country, Europe and the world. Road and rail networks provide fast and efficient links and Manchester International Airport is only 20 minutes drive away. There is direct access to the national motorway network via the M60 and M67, which run through the borough.

Work on an extension of the Manchester Metrolink costing £260 million began in 2008. Trams have run to Ashton and Droylsden since 2013. Ashton Bus Station was upgraded into a new transport interchange, opening in 2020. A covered concourse replaced the five island platforms, and the site will be linked to the Metrolink terminus with new waiting areas, bicycle parking, and better access to travel information and tickets. Improved pedestrian routes will take people into the town centre. The new Hyde Bus Station opened in 2007.

Phase one comprised two sites. The new Clarendon Sixth Form College, which began taking students in the autumn of 2015. An “advanced technologies centre” on Stamford Street, Ashton opened in 2017 providing a learning facility to support the growth of advanced engineering and technology in Tameside.

Phase two of Vision Tameside opened in March 2019 creating an advanced skills centre for Tameside College alongside a new joint service centre for Tameside Council, Ashton Library and partners. The skills centre provides facilities for students studying a wide range of vocational subjects including hair and beauty, hospitality and catering, bakery and confectionery, travel and tourism and business skills. Ashton’s Victorian town hall and the old water board offices, which are both listed buildings, are being retained.

Phase three ensures the Beaufort Road campus offers learners modern, inspirational learning spaces. Alongside the new advanced technologies centre, they will have access to facilities for engineering, construction and the built environment, motor-vehicle, sport and public services and health and social care provision. Life science industries have been identified as growth industries in Greater Manchester and are concentrated in Oldham and Tameside. A Construction Centre opened at the Beaufort Road site in 2020.

In addition, Ashton’s old public baths, which lay derelict for many years, has been reborn as a “high-tech business incubator” with help from the European Regional Development Fund and the Heritage Lottery Fund. The new office space is housed inside a free-standing timber-clad pod within the former main pool. At the same time, Ashton’s market has been refurbished with the installation of kiosks alongside traditional stalls. The Ashton Arcades shopping centre opened in 1995. The centre covers 13,000 square metres on two floors with over 40 shops. In 2006 IKEA Ashton opened covering 27,500 square metres. At the time of its creation, the store was the tallest in Britain. 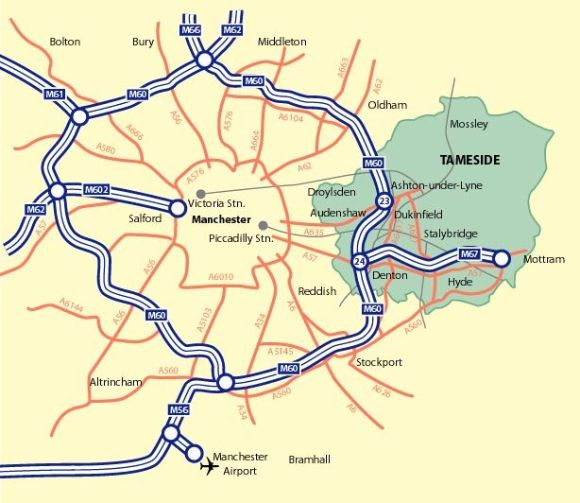