This is an exciting time for growth.  We are driving our ambitious plans to ensure Leeds is the best city in the country. We are continuing to shape vitally needed investments, engaging all sector organisations and networks to ensure we have a positive impact on the lives, prospects and opportunities of people living in Leeds for years to come.

Leeds is an economic powerhouse and the second largest local authority in the UK by population. It has the UK’s largest financial and professional services hub outside of London. We have four universities and several colleges, a fast growing digital sector and are a leading retail, cultural and leisure destination. In recent years, high profile developments have been completed such as First Direct Arena, Trinity Shopping Centre and the opening of the largest John Lewis store outside of London. We are now planning for the arrival of HS2 and the delivery of an ambitious housing growth target in our Core Strategy.

Examples of some major projects key to the city and the region’s prospects across varying time frames are:

Transport – remains a truly transformational opportunity for the city, city region and the wider North. The HS2 Growth Strategy shows a future with 300,000 new jobs, a £54bn uplift to the regional economy, radically improved infrastructure and an international specialism in high-speed rail engineering and technology.  The recently published Transport for the North’s draft Strategic Transport Plan provides a vision of a £100bn economic boost and 850,000 additional jobs by 2050. It is ambitious, but deliverable, transforming transport connections across the North to drive growth and close the economic gap between the North and the rest of England. There has already been significant investment in the train station’s new southern entrance, opening up the potential of the South Bank.

Visitor Economy – Our major attractions continue to grab the headlines and climb the league tables, individually and as a package.  First Direct Arena has just announced 2017 ticket sales which put it 13th in a worldwide list of 200 best venues. In Europe it is number 6 and comes 4th in the UK. Our destination marketing specialists, Visit Leeds, have topped the 2017 English Tourism Social Media Index for Yorkshire and the Humber…a leap of 44 places recognising the effort and investment going into new and effective ways of promoting the city.

Following the disappointing decision about our eligibility for 2023 European Capital of Culture, we are “Working in partnership with organisations that have already pledged in support of the bid to support an event which would highlight Leeds as a thriving and successful city capable of delivering a cultural showpiece all of its own.”

Hosting the finish of the 2018 Tour de Yorkshire in the city centre will be absolutely massive for the city. And right ‘on its wheel’ comes the ITU World Triathlon Leeds 2018.  These events are testament to our commitment to hosting world class events, but also have immense and measurable spin-off benefits for the economy and for health and physical activity.

Culture is central to the city’s identity, creativity, economy, health and social cohesion. 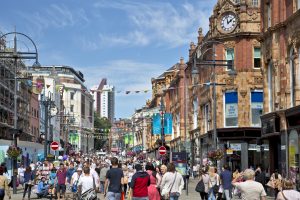